And to all our partners 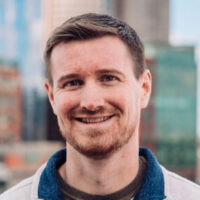 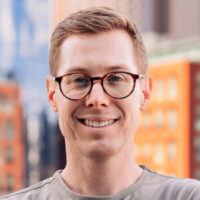 For information on how the data is collected and analyzed, please hop to the bottom of this page or reach out to [email protected].

“In this easy money environment, one would think becoming a unicorn is a foregone conclusion the moment your Delaware LLC is incorporated.”

The data on unicorns in 2021 (and even into early 2022) was truly astounding. It’s safe to say that we’ve been brought back down to earth in the last six months. In 2021, more than 40 new unicorns were minted each month. In the last three months, we’ve averaged eight. The tides have turned significantly. 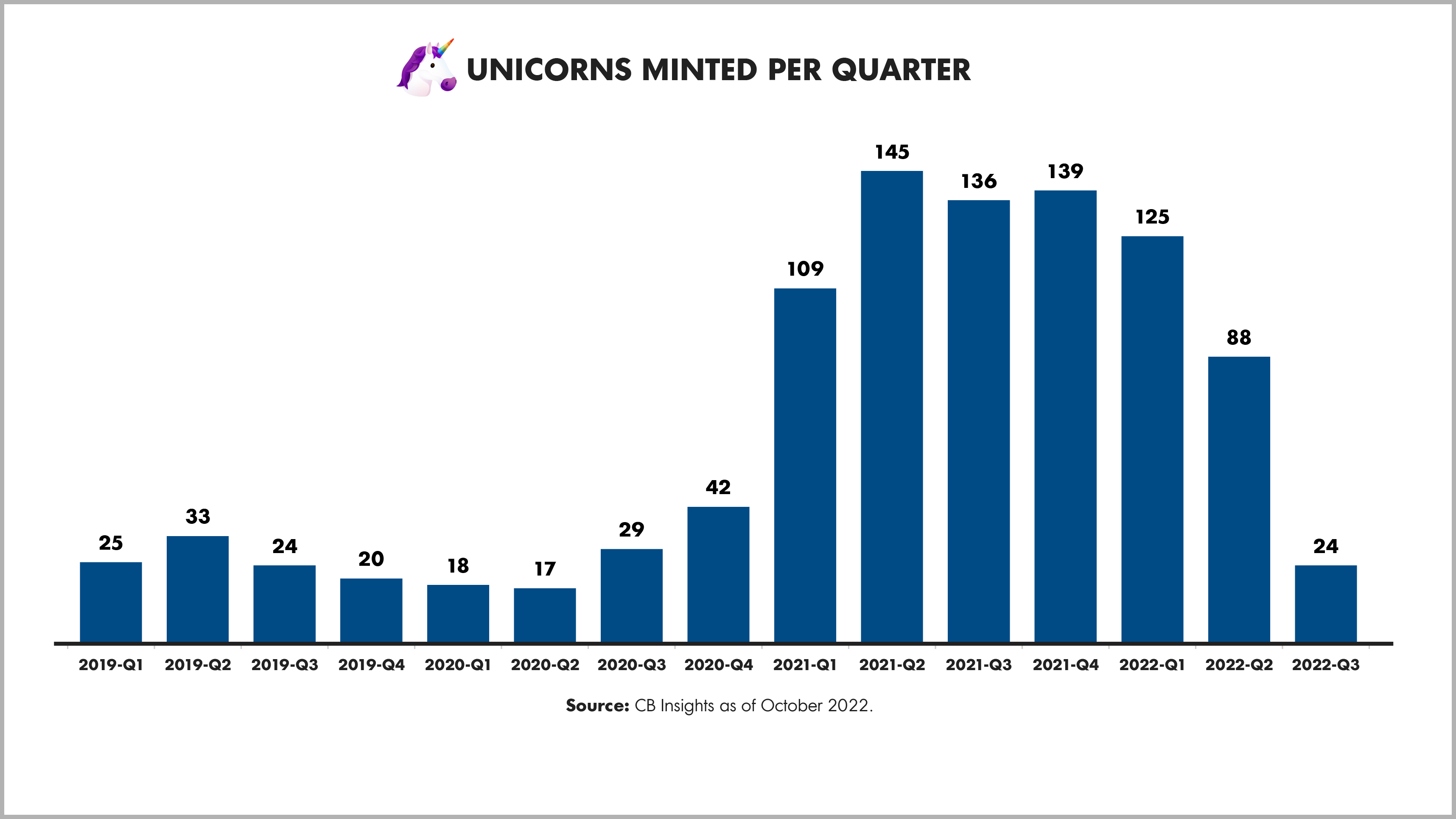 When operators sat down to build 2022’s budgets in late 2021, growth was the key metric and so GTM and R&D teams were given cash to drive growth into new product lines, new customer profiles, and new paid-ad channels. Hiring was at an all-time high and headcount approvals were relatively easy to come by.

We all know what they say about best-laid plans.

In this report, we spend the first two sections talking about what’s happening in the public markets and what it’s meant for private SaaS businesses. After surveying 660 companies, it is certainly not sunshine and rainbows. However, what has happened and why is paramount in order to prepare for whatever comes next.

The latter sections focus on what’s within your control and how to navigate planning for 2023. The future is uncertain, but there are paths to building a market-resilient startup able to withstand any economic volatility.

Over the last few years, SaaS businesses have been facing whiplash like we’ve never seen before.

Here’s the TL;DR since November:

The most recent shock in April 2022 saw fast growing SaaS companies get hit the hardest, as valuations fell from 46x their last 12 months (LTM) revenue to 11x.

On occasion, private companies are able to insulate themselves from public market chaos. But few startups have had insulation (re: cash runway) thick enough to protect them from the volatility of the last six months.

The result? Founders are left with whiplash trying to build the type of company that the market is rewarding.

Founding a successful SaaS business, even in the best of times, is a nearly impossible task—and we are currently far from the best of times. Calling the past six months chaotic would be an understatement. In the public markets, valuations—regardless of their growth rate—have been put through the ringer. 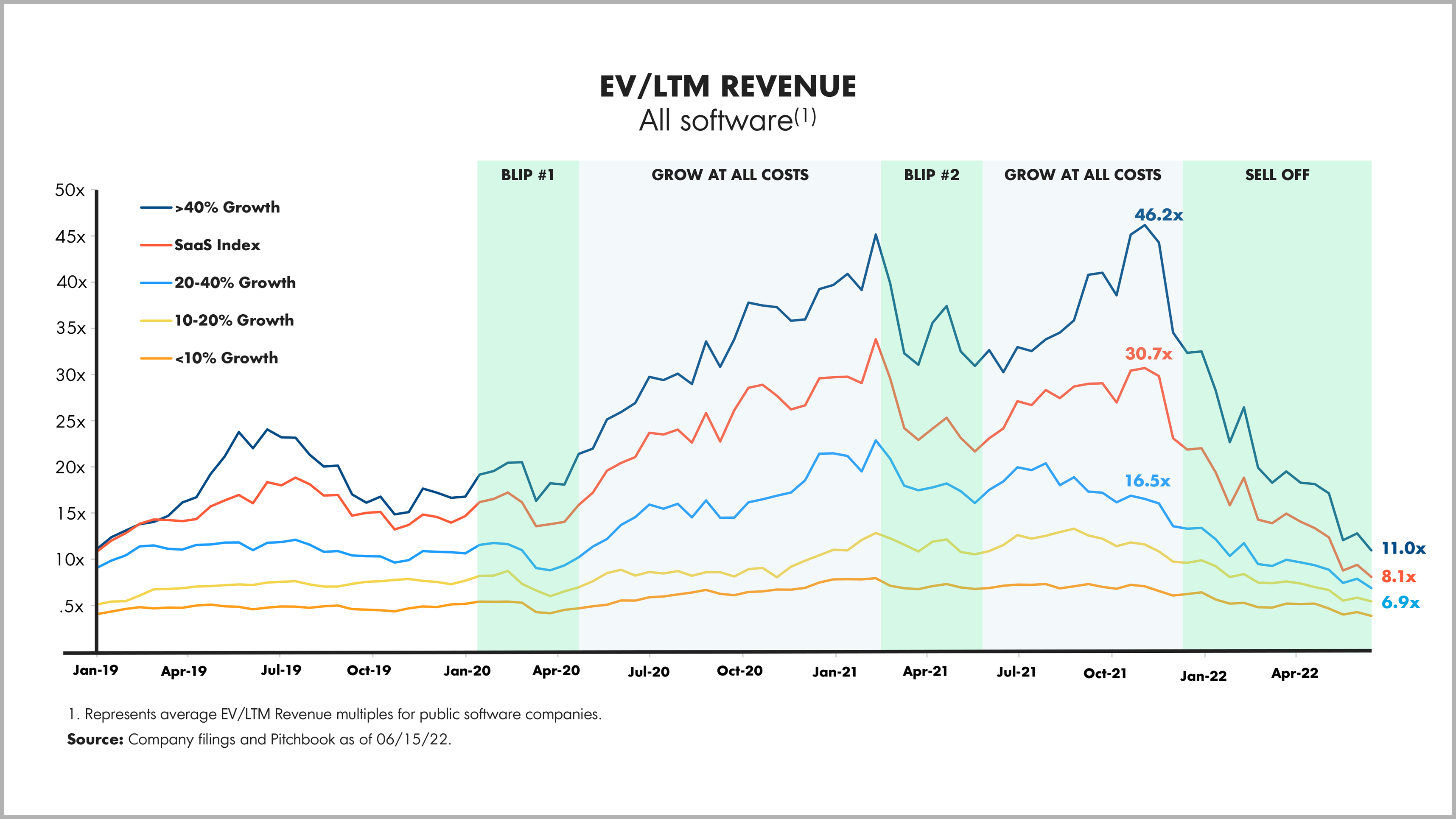 2) The value of growth has plummeted

As we’ve seen for the last five-plus years, growth rate has been the largest factor in determining a company’s valuation. The Rule of 40 (Growth rate + free cash flow margin) had been so uncorrelated with growth that we even noted it had died last year. Well, it’s back from the dead. 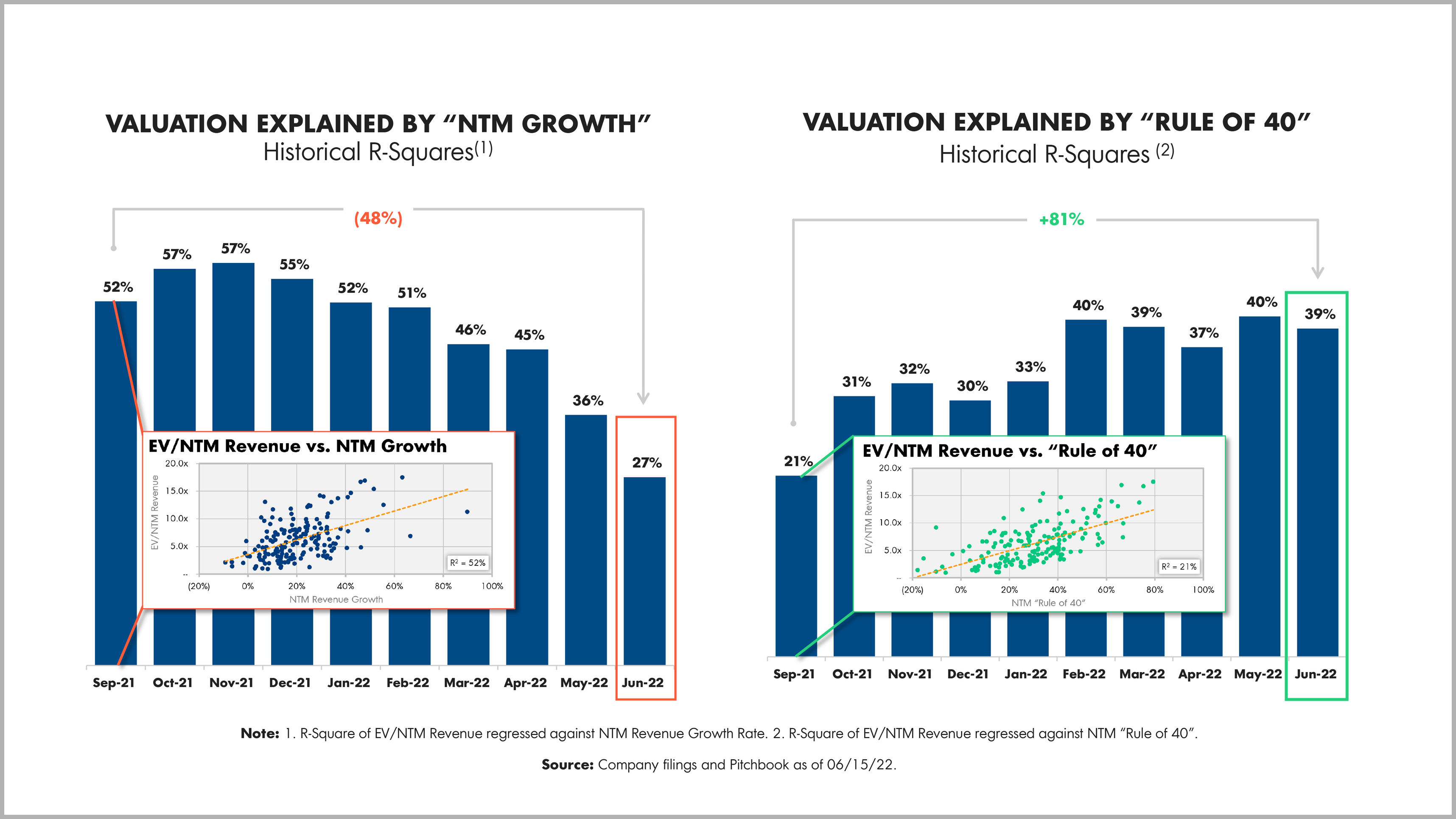 A year ago, SaaS companies’ valuations highly correlated with their next 12-month growth rates. It meant that 57% of a company’s valuation was explained by the rate at which they could grow their ARR. Cash was cheap and public investors put a premium on future returns.

This shift, coupled with multiples for high growth SaaS companies crashing by 75%, changed their survival strategy. In particular, a company needs to more than double their ARR to command the same valuation that they received 12 months ago.

3) Private SaaS has faced whiplash, most notably in hiring

When the markets truly shifted in Q2, founders and operators needed to flip budgets on their heads. As you can see, a minority of companies have kept their hiring plans since the beginning of the year. Most have moved toward more moderate growth, and we’re seeing freezes and reductions when they weren’t anywhere to be found at the top of the year. 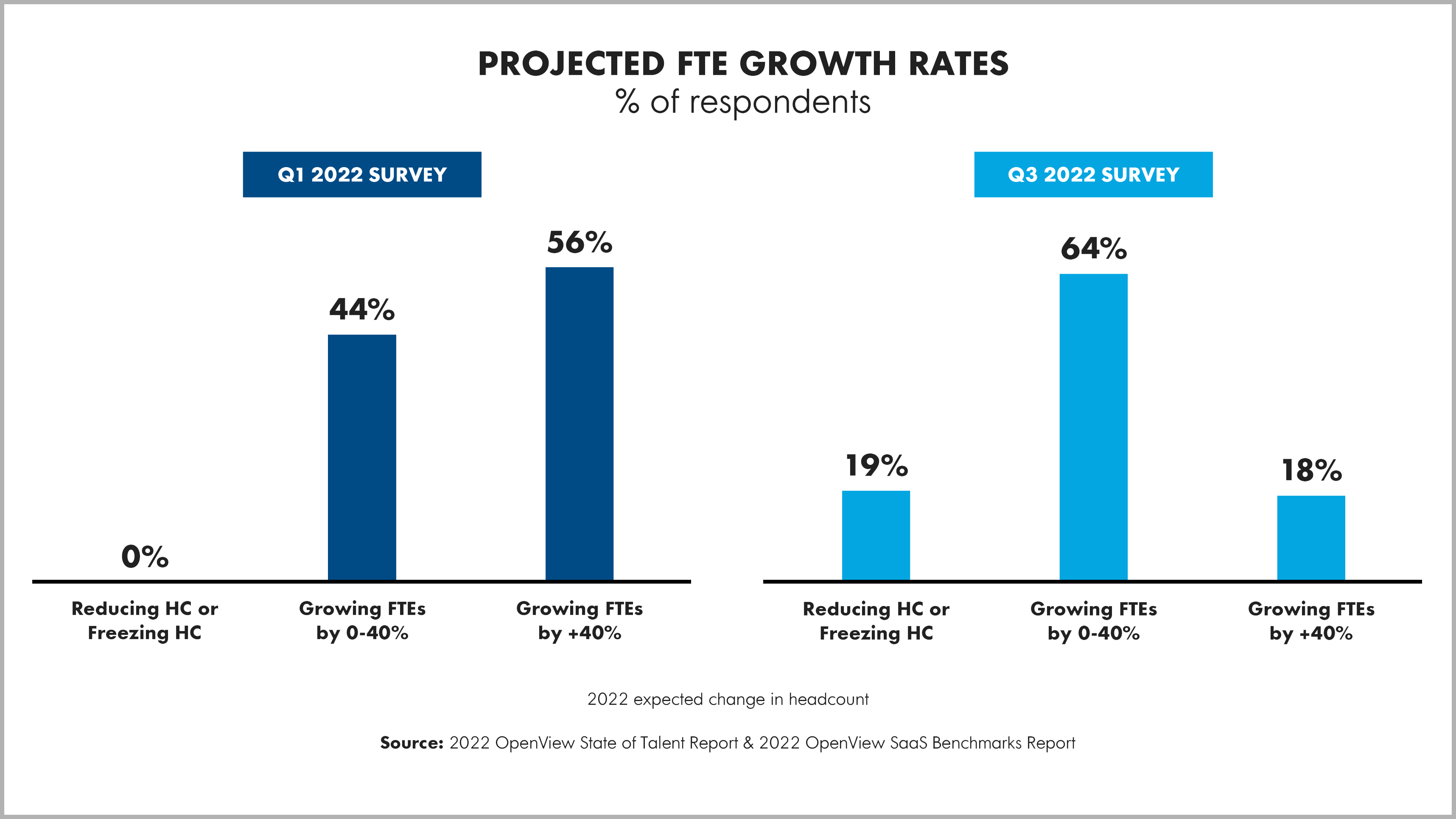 Slashing Spend Across the Board

Slashing Spend Across The Board

The reality is an overwhelming majority of respondents are slashing spending regardless of cash runway.

Everyone is cutting spend, regardless of runway 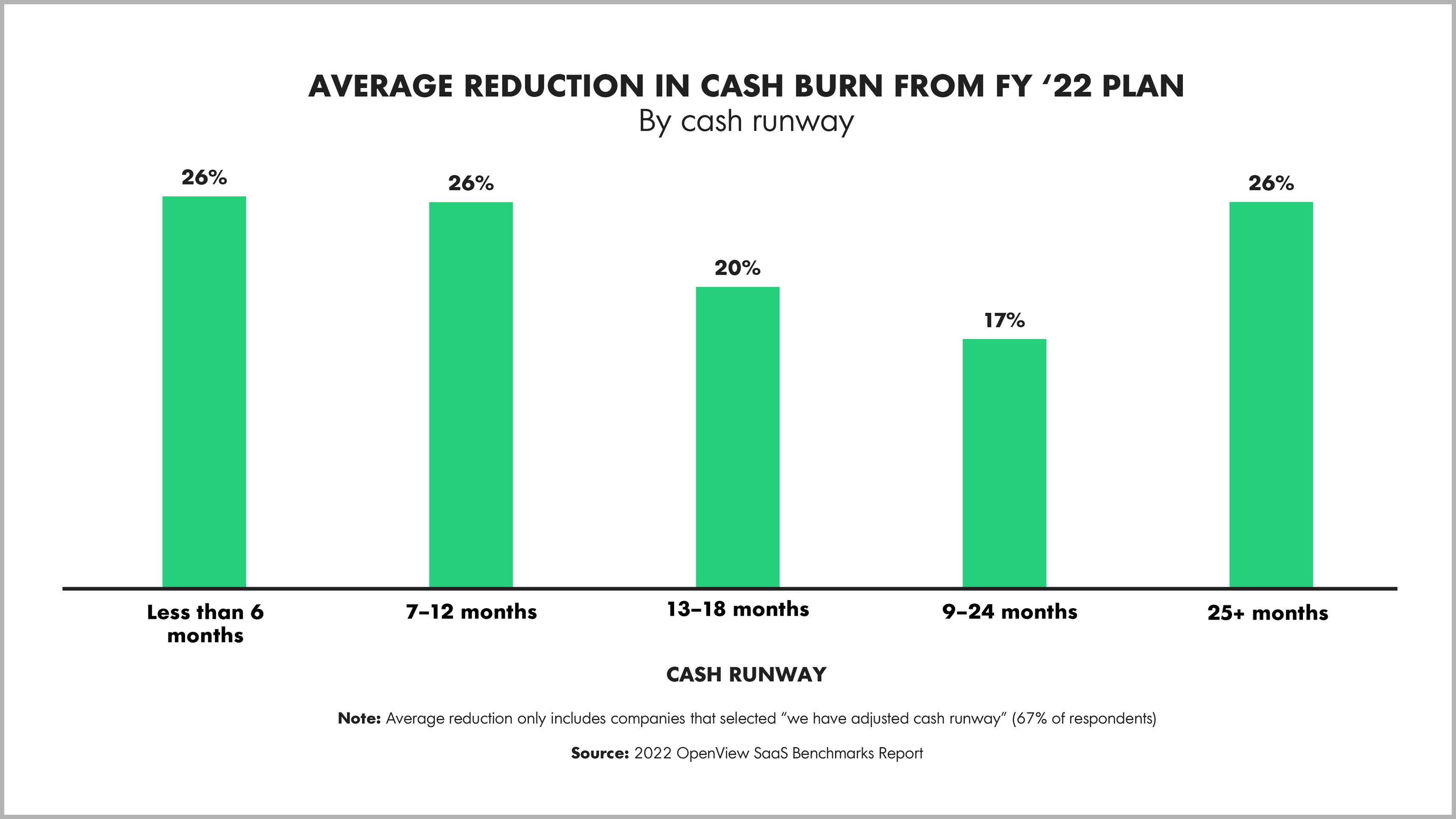 Those with 25+ months of runway have the luxury of continuing their spending habits to maintain or accelerate growth. But they’re not. In fact, their actions hint that companies are gearing up for the current conditions to continue, or worsen. It’s not clear when the next great time to raise cash will be. In today’s environment, spending the cash that’s currently in the bank requires a lot more scrutiny.

Put simply, spending with the hope of achieving high growth used to be a lower-stakes game. Today, it’s a high-stakes game that’s often not worth betting the farm on. 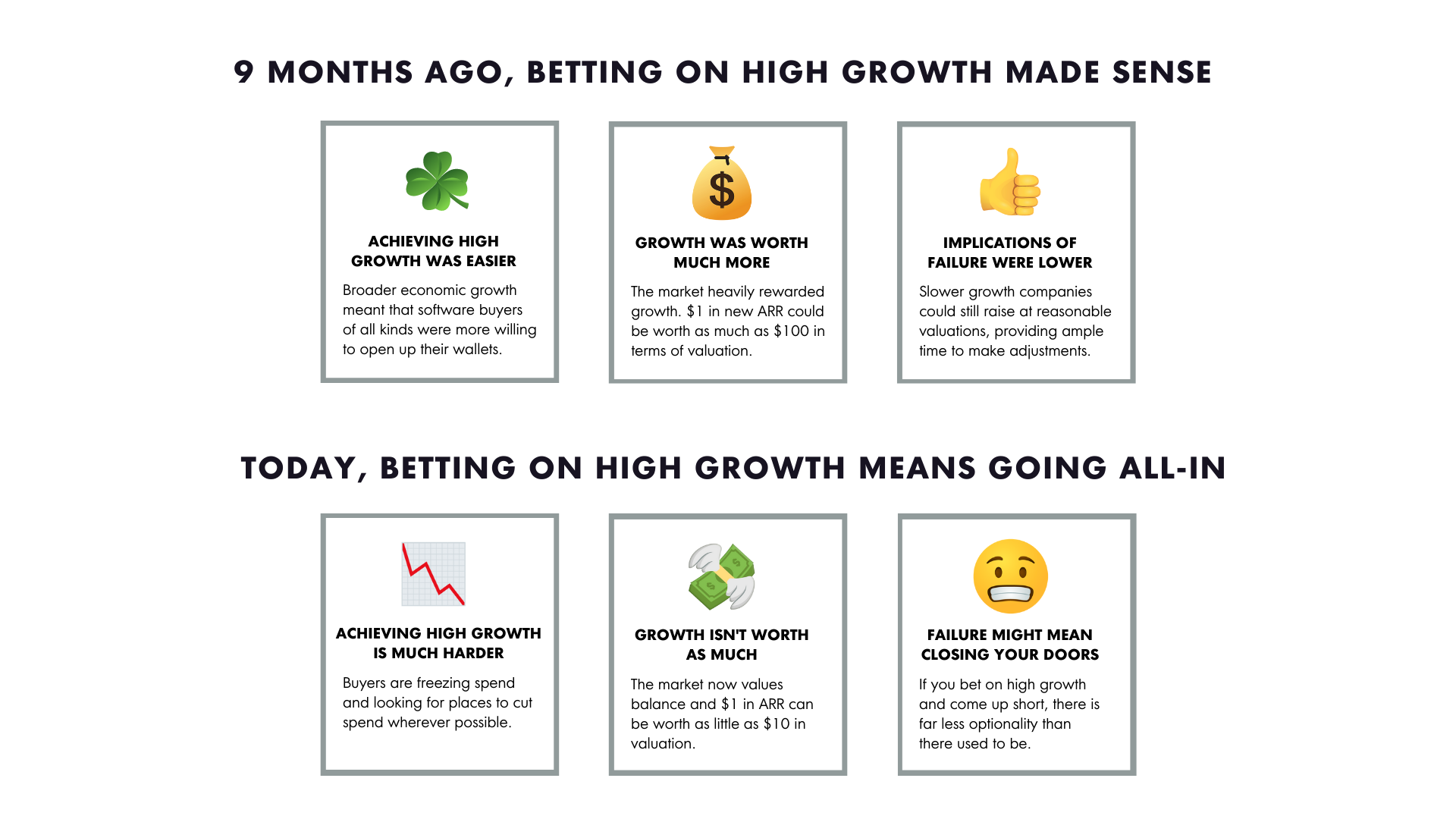 Today’s noise is overwhelming: Somewhere, a TV blares with CNBC guests yelling about how companies need to be cutting cash burn by 50%. Elsewhere, a curious advisor questions why the ARR target had to be reduced just because of a 5% reduction in force. Simultaneously, a Twitter thread about how ‘grow at all costs may be back by the holidays’ is picking up steam. The noise is insufferable—and figuring out who may be right is a lost cause.

Block out the noise, build resilience into your business model, and focus on consistent execution. The data we collected backs these notions.

The data shows that CAC payback and NDR are the underlying factors driving the two most popular metrics used to assign value to companies: growth rate and the Rule of 40.

When we put CAC payback and NDR together, the durability of companies in this low CAC/high NDR bucket jumps off the page: 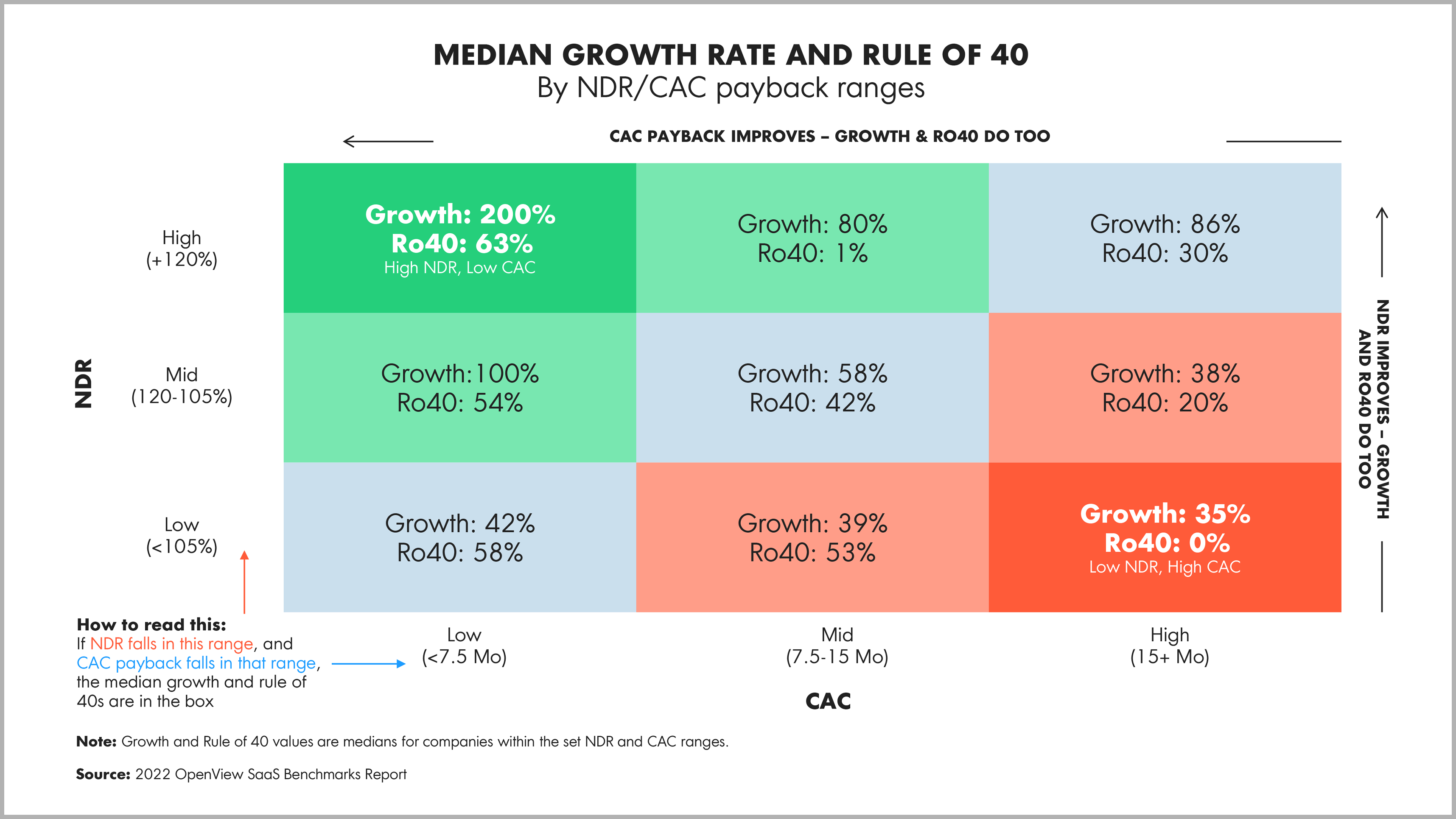 Intuitively, this makes sense. Companies that can acquire customers at a low cost relative to their peers will be able to grow at a lower cost and faster rate. These same companies that retain and expand the customers they acquire better than peers have an additional efficient growth channel. When you put those two together, you’re left with the ability to fuel consistent growth regardless of market conditions.

Depending on the market(s) you sell to, you will have differing definitions of what good and great look like. Smaller companies have shorter buying cycles (lower CAC), but target customers are generally less committed to your product and may be quicker to churn (lower NDR). The opposite is true for selling upmarket: 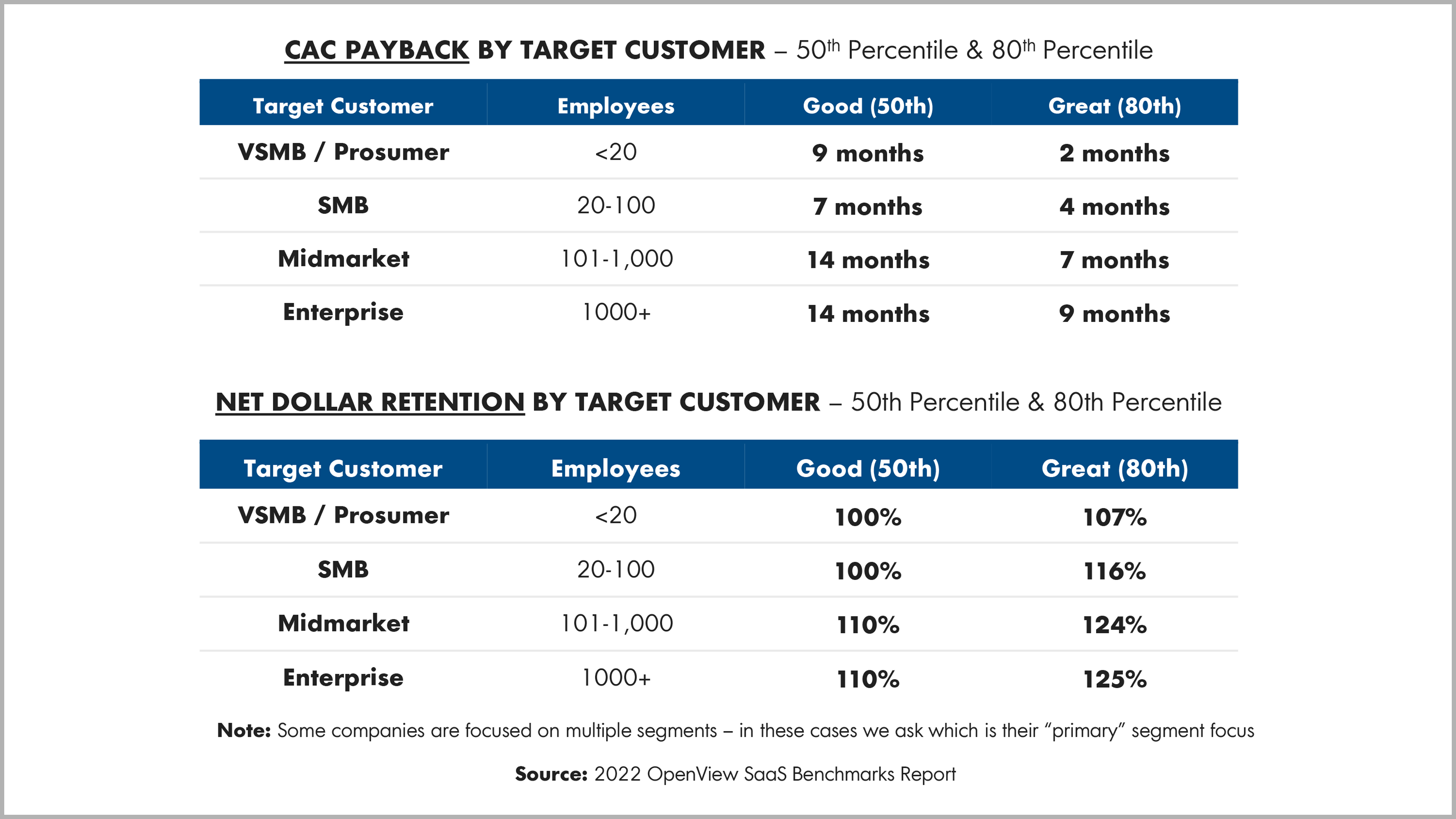 Great CAC payback and great NDR are clear north stars for leveraging optionality, but neither are easy to come by. Thankfully, the companies that have maintained it through these turbulent times give us a window into how to get there.

The path to great CAC payback is discoverability and a robust free product.

PLG has traditionally lowered CAC, but now everyone is doing it

Product-led growth (PLG) adoption is as high as it has ever been and most of the basic tenets of PLG are now ubiquitous in the market. End user value (89%) and delivering instant value (82%) are at least partially a focus for the large majority of companies. While there will always be room for optimization on these tactics, companies are beginning to differentiate on less frequently used PLG principles. 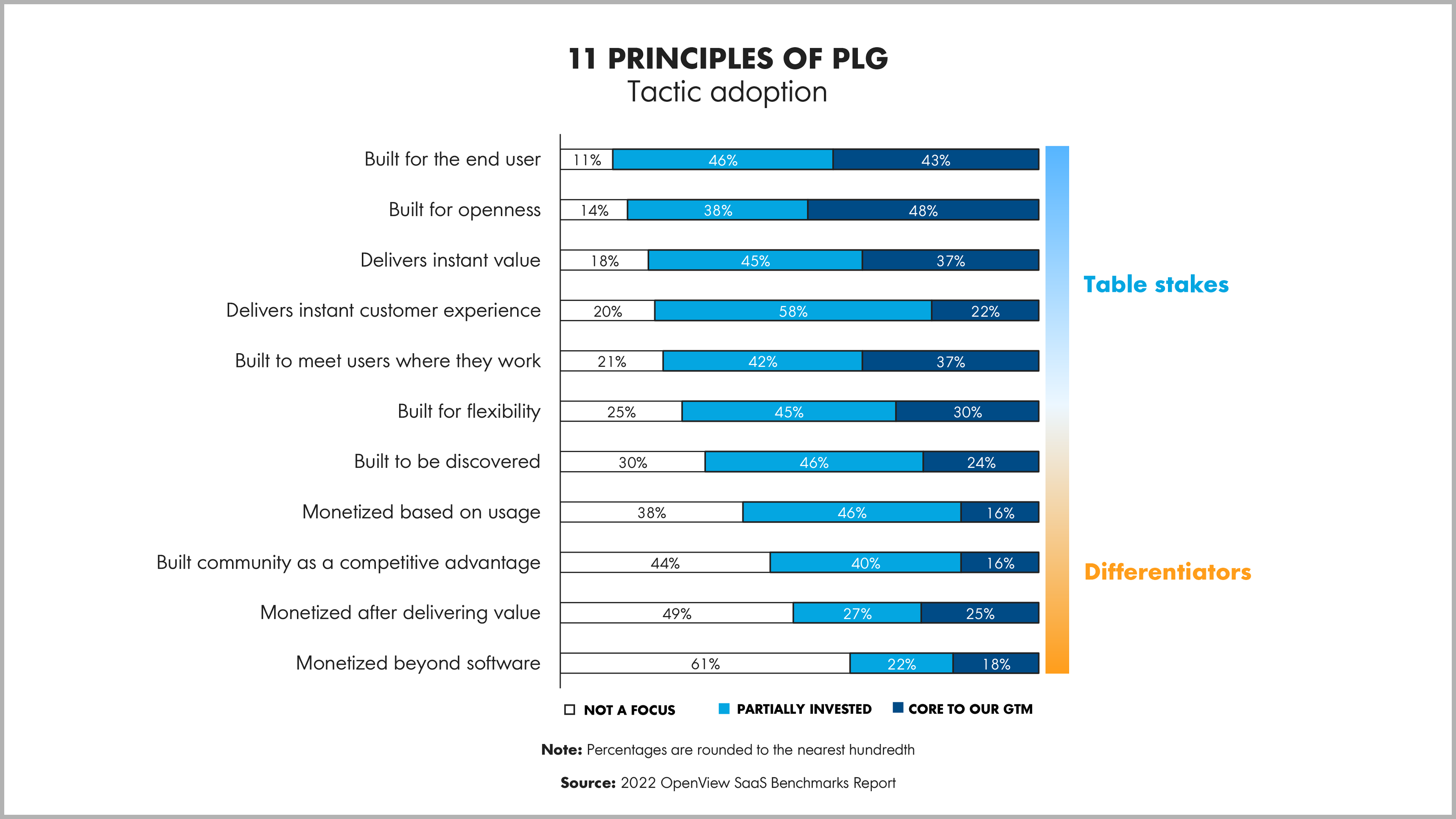 Stand out with Discoverability and a Robust Free Product

When we looked at each of the core PLG tactics, two stand out as major differentiators in your ability to acquire customers at a low cost relative to the revenue they will contribute: Discoverability and a Robust Free Product. 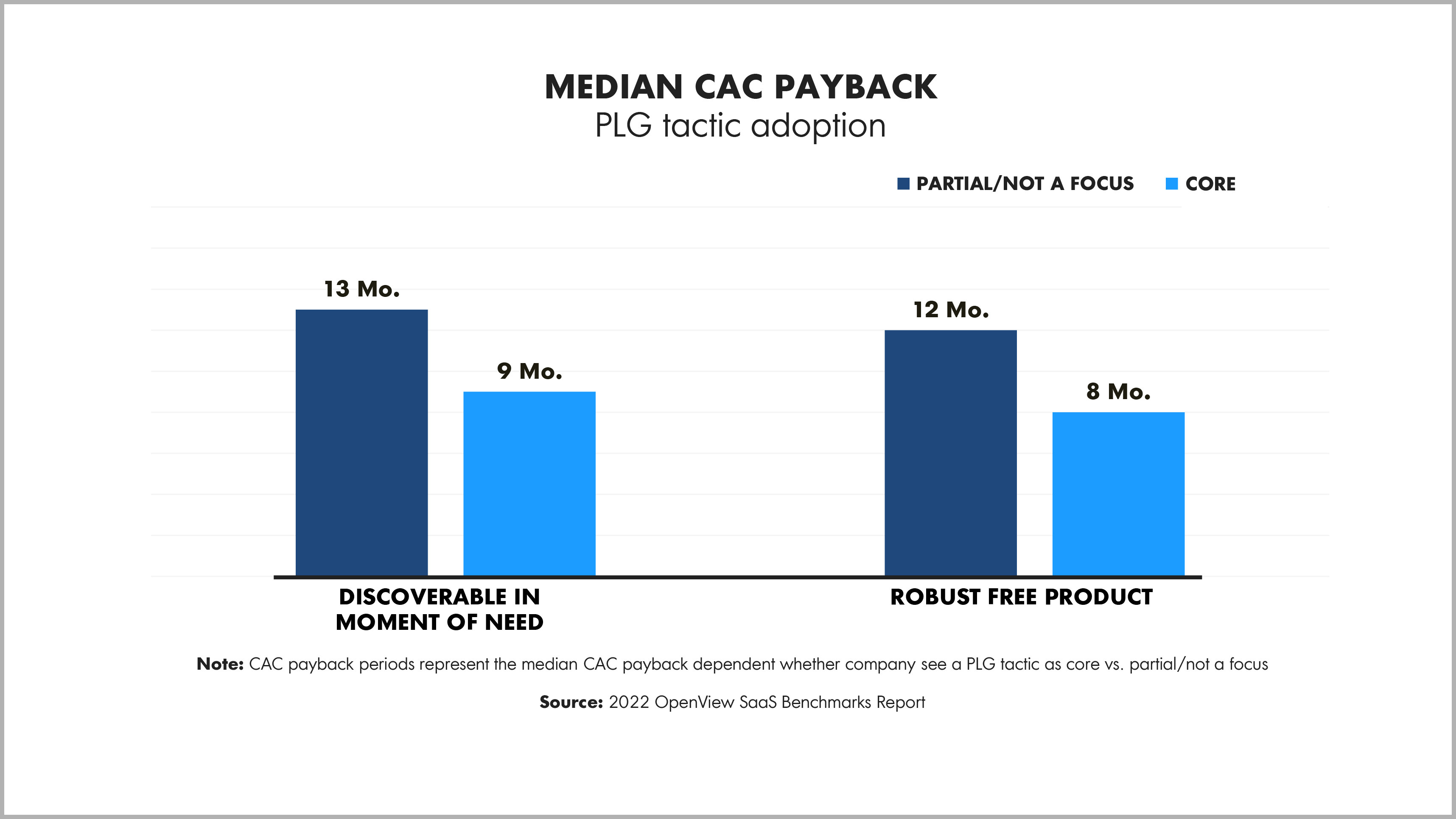 Building your product to be discovered in an end user’s time of need can provide a critical boost across your marketing funnel. Your marketing becomes extraordinarily more efficient if your product can show up for your customer at the exact moment that they need your help—the moment where their intent is highest.

For example, Zapier was on the cutting edge of discoverability. When you Google “workflow automation tools” or “low code integrations” you can find all of their competitors bidding on Google ads. But when you Google “connecting typeform with google sheets” you’ll see Zapier’s ad dollars at work. Software buyers rarely search for software, but they’re constantly searching for their challenges. This is just one example of building to be discovered, but the companies that are doing it enjoy much better CAC payback than their peers.

Robust free products: Always be closing, and that includes your product too

Another growth lever is a robust free product offering that can be core to your strategy. This is similarly intuitive. When your product can provide meaningful value before the paywall, your company has to do less selling and your customers have a higher willingness to pay when monetized. Assuming you’re able to keep the costs of your free product down, this can help translate to a 33% improvement in CAC payback.

Maintaining NDR in this environment is more challenging and more important than it has ever been.

The macro environment is leading to cuts everywhere, including software spend

Today, everyone is looking for cost savings opportunities and software buyers are no different. Every employee is being asked where they can cut back on spend and even if your software is providing significant value, you may still see churn. Furthermore, keeping (and growing) your current base of customers becomes more and more important when there’s less money available to go acquire new customers. As businesses cut spend and look for efficient routes to growing revenue, existing customers present a great opportunity.

Having said that, improving churn and expansion metrics is hardly easy, cheap, or quick. When time and cash are not on your side, it can be difficult to justify scaling your CS team, building products to upsell to the base, or making the shift to the enterprise. While these tactics often make sense, they are big bets that may not move the needle for multiple quarters.

The data points to an NDR strategy that too often gets overlooked: pricing

Altering your pricing isn’t an overnight activity – but relative to the other activities you can undertake to move ARR by +10%, it is by far the cheapest. And the companies we see making this adjustment are seeing success beyond just ARR alone. Most notably, the median impact on NDR was a 14% increase. for companies in the $2.5-$10M range. 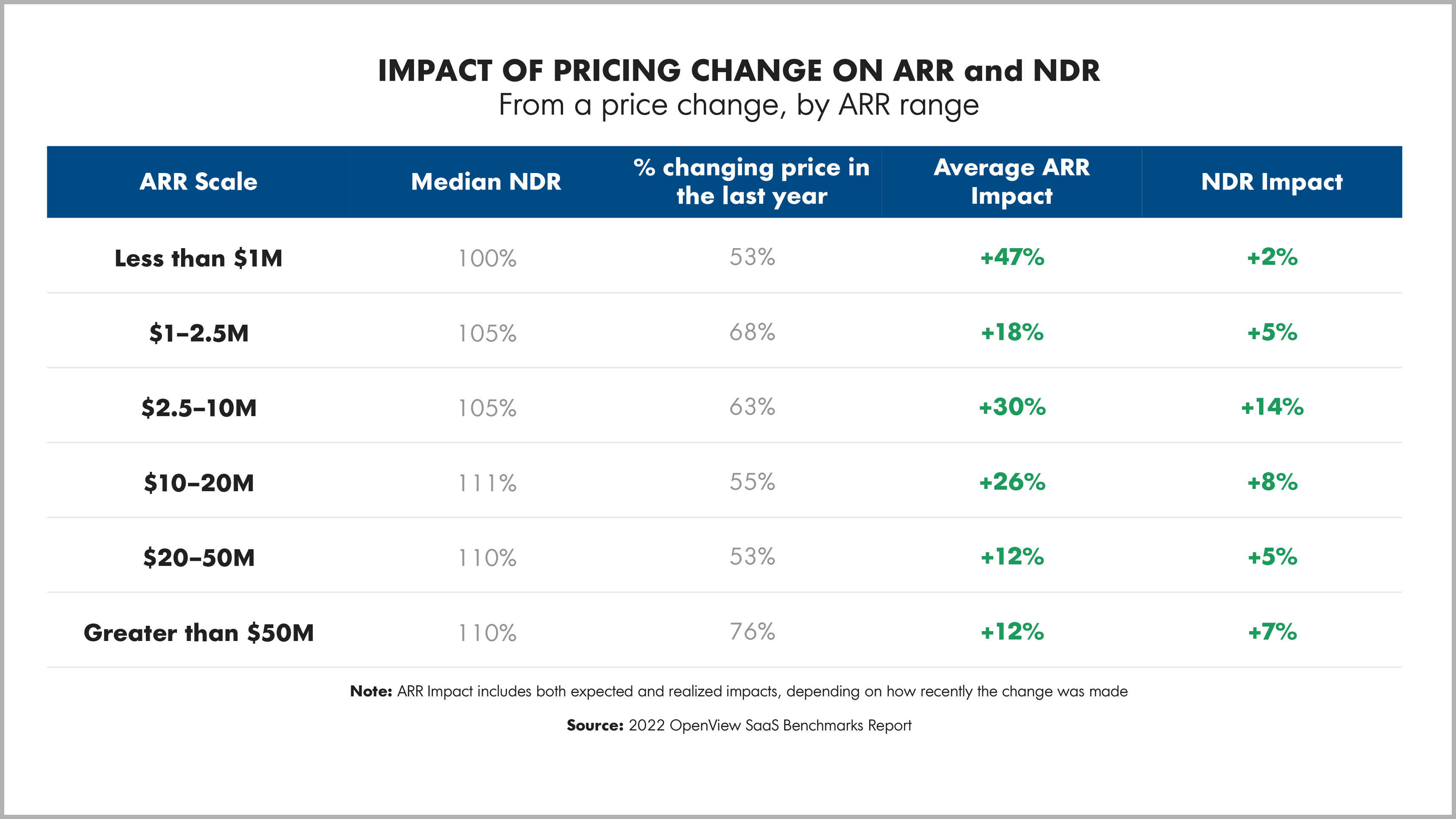 Do your research before jumping to a price change

If you’re sold on making a shift, make sure you put in the work required before starting. Shockingly, 16% of companies that changed their pricing in the last year did not conduct a dedicated analysis to determine the changes they should be making. In doing so, they paid for it with the amount of dollars left on the table. 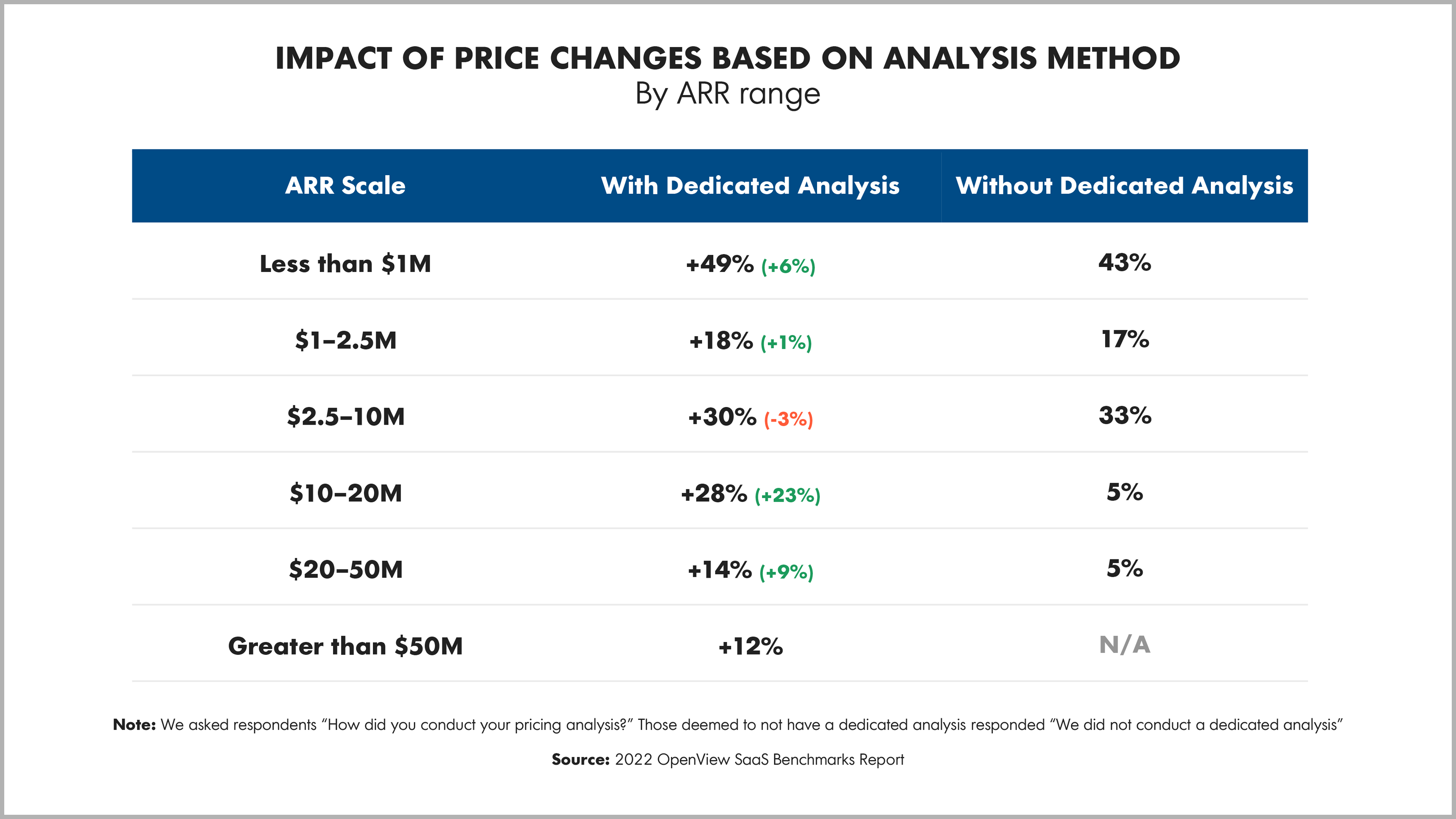 Generally, we see that startups under-price their products early on in order to acquire more users and logos to guide product development and show early traction. However, just raising your pricing alone may still leave money on the table. Chargebee has seen an increase in startups changing their pricing models all together. Across their customer base, there has been a 30% increase in startups offering a usage-based model. If you’re looking to make a change, get started here.

Conclusion See how 600+ founders responded to this year's survey

See how 600+ founders responded to this year's survey

Don’t forget to download the full report for even more objective data that lets you analyze how your company stacks up.

Note: Some of the companies referenced in the report are OV portfolio companies. For a full list, please see our website. Also, OpenView is the source of all the data featured in this report, unless otherwise specified.