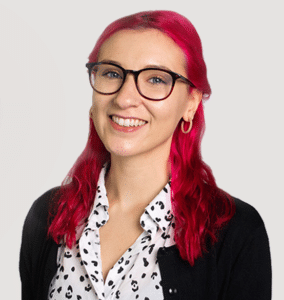 Kim Scott’s Radical Candor teaches leaders how to care personally and challenge directly—two wildly impactful things that result in happier, more productive workplaces. With over half a million copies sold since its release in March of 2017, the book has been translated into 20 languages and is now its own business.

Last week Kim released her follow-up, Just Work: Get Sh*t Done Fast & Fair, which focuses on how to recognize, attack, and eliminate workplace injustice—and transform careers and organizations in the process.

Kim was inspired to write Just Work after feedback from underrepresented professionals made it clear that not everyone is able to use the strategies outlined in Radical Candor equitably and equally. As one Black woman CEO pointed out, it’s hard for her to create radical candor in her workplace without someone invoking the angry Black woman stereotype.

“The goal is to fix the problem, not only to describe it,” Kim wrote in a blog post. “So I focus on identifying what we can do, now, to create the kind of organizations we all long for—places where we can do our best work unimpeded by the inefficiency and inhumanity of injustice.”

To help readers put the new book’s ideas into practice, Kim co-founded Just Work with Trier Bryant. This isn’t Trier’s first foray into diversity, equity, and inclusion (DE&I) work. She started her career in the Air Force, where she implemented her senior capstone project that highlighted the lack of diversity across all the service academies and how that ultimately affects the lack of officer diversity. From there she led teams at Goldman Sachs, Twitter, and Astra, and she also founded DE&I consulting firm Pathfinder.

I am now Co-Founder & CEO of @JustWorkBook! 🙌🏾@kimballscott (author of NYT best seller @candor) & I started this company to put the ideas from her new book “Just Work: Get Sh*T Done, Fast & Fair” into practice.

For the BUILDing To Boss podcast, OpenView’s Kaitlyn Henry spoke with Trier about Just Work and her role as the company’s CEO. “As an industry, we need to get away from talking about all the problems with diversity and all the ways we’ve tried to move the needle, but failed,” Trier said. “It’s time to start getting tactical with actionable solutions.”

Listen to the episode below or scroll down to read the rest of this story.

It’s surprising that there wasn’t already a framework to support productive conversations about workplace injustices and inclusion. This seems like a particular oversight in the tech world, where there’s a framework for everything from product development and engineering to marketing and leadership.

Despite being an Air Force officer who had worked on Wall Street and felt equipped to handle the toughest workplaces, Trier had some personal revelations about her own experiences as she read Kim’s new book. “Bullying was the aha moment, as my Auntie Oprah likes to say,” said Trier. “If someone asked me whether I’d been bullied in my career, I’d have said, ‘Have you met me?’ But after reading Kim’s work, I realized I’ve been bullied a lot.”

Bullying is one of the three primary layers in the framework. The other two are bias and prejudice.

Bias—when someone doesn’t mean what they say—is the most prevalent type of injustice, and therefore the one people experience most frequently. The example Trier uses is having an Uber driver who was taking her to Twitter—where she was Global Head of Revenue, G&A (Corporate Functions), University, and Diversity Recruiting—assume she worked in a call center. After Trier explained that Twitter doesn’t have a call center and that she was actually a leader on the people team, the driver said that he’d love to work at Twitter or for her, showing that his erroneous assumption was not intentional.

When dealing with bias, it’s important to interrupt it and call it out so everyone can grow and learn from the situation. The person being harmed in a bias situation should use “I” statements to address the issue, and organization leaders need to train people to be proactive about identifying and interrupting bias so that it doesn’t go unchecked.

Prejudice, on the other hand, is when someone means what they say. Trier recalled an interview scenario in which she was one of several people interviewing a Black woman for an opening on the team.

In that situation, the hiring manager had a bias, but that bias became prejudiced when they doubled down on it. Confronting prejudice requires “It” statements that clearly identify the behavior that is unacceptable. For example, “It’s unprofessional to refuse to hire someone because of their hair.” At a higher level, combating prejudice requires a code of conduct that articulates where the line is, what the expectations are, and what the consequences will be if those expectations are not met or that line is crossed.

“People can believe what they want,” Trier said. “But there’s a line of pushing what you believe onto others where it may cause harm.”

Bullying is when people are mean. Plain and simple.

An example of bullying that really stands out for Trier took place at a large conference. Trier was there with a company that made a lot of hires at the event, and was facilitating a debrief to collect feedback. A senior woman engineer came to the debrief, which was fine. What turned the interaction into bullying was the fact that the woman brought five other individuals who hadn’t even attended the conference, and she coached them on how to deliver the negative feedback that was part of her personal agenda.

“The senior woman leader was just trying to make it seem as if my team hadn’t done a good job,” Trier said. “She infiltrated my debrief with negative feedback that the individuals didn’t even experience and which likely didn’t even occur.”

When it comes to bullying, there have to be consequences. Those consequences might be conversational, they might be in terms of compensation, or they might have broader career implications. Trier acknowledged that levying consequences can be challenging—especially if the bully is a high performer.

But even if the bully is a star, you have to get them out of your organization if you truly want to create an equitable and just workplace.

Throughout the conversation, Trier emphasized the importance of specificity in both language and goal setting, an idea that circles back to Crenshaw’s key insight about being able to name a problem before you can fix it.

“Language is the number-one barrier to productive conversations,” Trier explained. “When people are uncomfortable with the language, it’s much harder. When people are comfortable, that opens the door to a much more transparent and empathetic dialogue.”

Common roadblocks include when someone isn’t sure whether to use “Black” or “African American.” Discomfort can also stem from a lack of knowledge about what certain terms mean: Hispanic versus Latinx, for example.

Trier shared that her organization, Pathfinder, does not use the terms “people of color,” “women of color,” or BIPOC (an acronym for Black, Indigenous, people of color). “We don’t use these terms because they aren’t specific enough,” she said. “What does it mean if someone says they’re going to hire more people of color? No one knows. You need to get specific about your goals.”

Trier pointed out that being vague really hinders an organization’s ability to not only set DE&I goals, but meet them. As an example, say a tech company claims that more than 30% of their team are “people of color.” However, if 90% of that 30% are Asian professionals—many of whom do not identify as “people of color”—then the company’s workforce isn’t really as diverse as the surface numbers seemed to indicate.

The state of DE&I: Progress and persistence

When Kaitlyn asked Trier for her thoughts about how corporate America is doing in terms of making meaningful improvements in DE&I, Trier emphasized the need to continue doing the work in a consistent and dedicated way.

“As long as there’s a majority, there will always be a minority. This work is not a sprint, but it’s also not a marathon. It’s not a task to check off. It’s an ongoing journey that only gets us where we’re going if we remain committed and show up every day to do the work,” she said.

Trier described the work done so far as the usual dance of one step forward and one step back. It’s not a linear process. She also highlighted the fact that different organizations are making progress in different areas, which might mean there are opportunities to learn from each other.

“Some organizations are absolutely getting it right when it comes to hiring and attracting talent,” she said. “Other organizations are doing exciting things in terms of engagement, development, and retention.” With DE&I, you really need to think about the entire employee lifecycle.

“This work is not a sprint, but it’s also not a marathon. It’s not a task to check off. It’s an ongoing journey that only gets us where we’re going if we remain committed and show up every day to do the work.”

One common challenge that trips up companies is trying to do too much at once without a strong strategy and then getting discouraged when the numbers don’t move.

“You need to take a phased approach because you’re never going to win if you try to boil the ocean,” Trier advised. “It’s not enough to say you tried. As my mom always said, trying is lying. You need to identify where you are, define a phased approach, and establish how you’re going to hold everyone accountable. And then you have to take it a step further by continuing to set new goals as you make progress.”

Related read: What Companies Should (and Shouldn’t) Be Doing About Diversity Right Now

The good news is that there is a ton of research proving the importance of DE&I—not just that it’s the right thing to do, but that it has tangible business benefits in terms of innovation, resilience, and revenue. The combination of the moral and ethical reasons with the financial reasons makes it easier to get everyone enthusiastically on board.

At the end of the day, Trier pointed out, we all want “to be able to show up and do our best work—the work we’re good at and passionate about. Workplace injustice is the thing that gets in the way of that shared goal.”

Trier is certainly passionate about her work, and Just Work is a huge opportunity to put that passion into play as she helps organizations implement the framework. A big part of that effort will be making sure everyone—people being harmed, upstanders, leadership—knows they have a role to play.

“My vision and my call to action for everyone is to understand what’s going on in the workplace, understand your role, and then step in and act,” she said. “I’m confident we can get there. It’s not going to be easy, but we just have to commit to it.”

More from Trier and Kim

Don’t miss an episode of BUILDing To Boss

Join OpenView’s Khira Gabliani, Kaitlyn Henry, and Casey Renner for honest conversations with exceptional women leaders who have built product-led growth companies that changed the way we work. Subscribe on Apple Podcasts , Spotify, or listen on our website.

The most productive founders do these five things on a daily basis.

by Riviera Lev-Aviv
HR & Leadership
Listen
Managers Do Things Right, but Leaders Do the Right Things

For our BUILDing To Boss podcast, we sat down with board director Anne DelSanto to get her take on building deeper employee engagement.